The NC Network for Safe Communities (NCNSC) team is dedicated to providing training, technical assistance, and research and evaluation support to sites working to understand and reduce violent crime. We are involved in several ongoing initiatives across the State in any number of these roles. We serve as the research and training/technical assistance partner to the United States Attorney’s Office in the Middle District of North Carolina and we work with sites in all three federal judicial districts in communities large and small. Below, you will find examples of the impact of strategies implemented within some of the communities with which we work.

The NC Network for Safe Communities has been working closely with the High Point Police Department on implementation and evaluation of the Offender Focused Domestic Violence Initiative (OFDVI) where the focused deterrence strategy is being applied to combat domestic violence. Our final report as part of the COPS-funded evaluation can be found here: COPS OFDVI Lexington – High Point Evaluation – FINAL. For a full presentation of results (Sechrist, Weil, & Sumner, 2014) from the North Carolina Coalition Against Domestic Violence conference, click: NCCADV 2014 Conference Presentation or click: 2014 June John Jay Conference Evaluation Presentation for findings presented at an international conference in June 2014 (Sechrist & Weil, 2014).

Evaluation highlights from the above mentioned presentations appear below.

Only 9% of offenders who have received a notification message have reoffended with a new DV-related arrest.

Note: repeat calls for service to the same address are still occurring, but are stopping short of actual violence.

The notification message goes onto to say that we [the police department] know who you are and you are now on a list being tracked for any future domestic violence offenses. Further domestic violence will result in swift, certain, and severe consequences. The offender’s anonymity is stripped and the offender is told that the victim is no longer driving the process. The police department is now taking charge. A seemingly simple concept has had rather astounding results when compared to traditional approaches to deter domestic violence. The graph below shows the 6-month and 1-year recidivism rates for notified offenders across offender categories in High Point. We have found that certain offenders are more likely than others to recidivate after notification at both the C and D levels.

What do we do now with what we know?

The NC Network for Safe Communities (NCNSC) team received COPS funding to conduct the evaluation of the replication of the OFDVI strategy in the first official site, Lexington, NC. As part of their involvement with Lexington, the NCNSC team has assisted with general training and technical assistance about the strategy and processes, data collection and quality control, partnership building, and outcomes and process evaluation. Recently, the NCNSC team presented along with partners at the Lexington Police Department about the strategy’s initial successes and lessons learned since implementation. The presentation was part of the 3rd annual Innovations in Domestic and Sexual Violence Research and Practice conference held in Greensboro. A copy of the presentation is available here: Innovations 2015 Conference Presentation NCNSC and LPD Evaluation of the Educating Kids About Gun Violence (EKG) Program

Evaluation of the Educating Kids About Gun Violence (EKG) Program

The Educating Kids about Gun Violence (EKG) program is part of the Fayetteville Police Department’s Operation Ceasefire initiative, The EKG program began in 2014 and is designed to teach kids about gun and gang violence and prepare them for healthy decision-making. The program is taught by Fayetteville Police Department officers to youth in all 7th and 9th graders in the Cumberland County School System, representing a unique partnership between law enforcement and the schools. By the end of the 2014-2015 school year, the Department will have reached over 8600 students county-wide with its gun and gang violence prevention and education message. The final report submitted to Fayetteville Police Department with evaluation results based on Year 1 can be accessed here: EKG Evaluation Results Year 1 Mar 2016-v4

The EKG program uses a video of a scenario of a young male who is faced with various decision points about gun and gang violence. The video exposes the classroom participants to the potential consequences of poor decision making about guns and gangs. Classroom participants then discuss decision-making and how the young male in the video could have made better decisions along the way to prevent the negative consequences he experienced in the video.

Based on preliminary data analyzed by the NC Network for Safe Communities team stemming from surveys completed by student participants, the EKG program has been administered to a sample of students where nearly half have already experienced a close family or friend who has been shot with a gun. Overall, 2.2% of student participants are already in a gang and another 3.5% would consider joining a gang. About 12% had either been shot at or threatened with a gun themselves and another 3.3% reported that they have used a gun to threaten or shoot at another person. Over 20% of student participants reported that it would be easy to get a gun if they wanted one and nearly 8% said that their friends carried guns regularly. Nearly 10% of the student participants reported that they have already felt pressure from others to carry guns themselves. The descriptors of the sample suggest that the EKG program is targeting a rather vulnerable or at-risk population of students, many of whom are already experiencing some level of gun and gang-related violence in their lives. Even still, the changes in attitudes and intended behaviors toward guns and gangs as a result of the EKG program are very promising. Students showed statistically significant (p ≤ .05) attitudinal/cognitive and intended behavioral shifts in the desired direction from pre- to post-survey, indicating that exposure to the EKG training program was successful in leading to student attitudinal, behavioral, and cognitive changes. Specifically, students reported the following shifts after exposure to the EKG training based on their pre- and post-survey data.

Even more compelling are the anecdotal stories coming from the officers who facilitate the EKG sessions about student reactions and revelations about their own experiences related to gang and gun violence. Officers always leave their direct contact information with the students at the end of each session and many students have reached out to officers forging true relationships and building trust around this sensitive matter of violence in their everyday lives.

We look forward to continuing our partnership with the Fayetteville Police Department on the EKG program. Final evaluation results will be forthcoming thanks to funding from the North Carolina Governor’s Crime Commission for the NC Network for Safe Communities team to complete the evaluation work.

The NC Network for Safe Communities and UNCG have been the research partner to the United States Attorney’s Office in the Middle District of North Carolina (MDNC) for fifteen years. Recently, the USAO provided funds to NC Network for Safe Communities to create a brochure to document the MDNC’s success in reducing violent crime through use of focused deterrence and PSN strategies. Across 10 sites, violent crime was reduced from 8-61% from year of strategy inception to year 2011. The graphic depicting declines in violent crime across site is below and the full brochure can be accessed here: MDNC Brochure 2012. 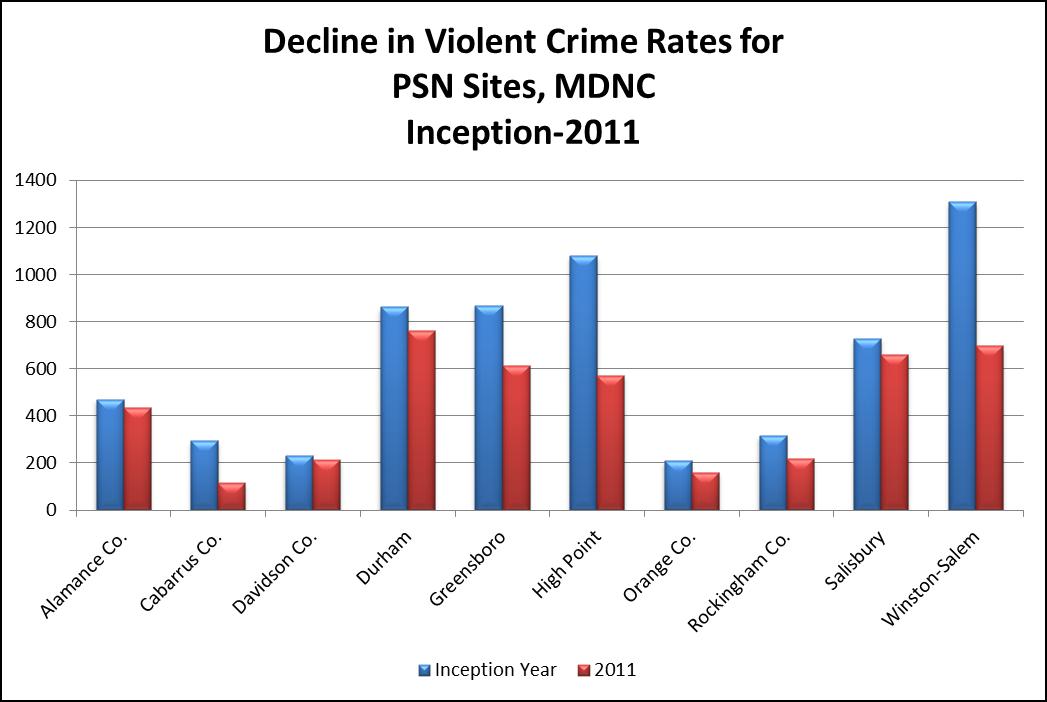 The assessment includes an overview of the Guilford County community and the prevalence of specific risk factors for gang involvement. Data provided by law enforcement data describes statistics on gang-related crime in the county, which includes data from the cities of Greensboro and High Point, and the unincorporated areas in Guilford County. Publicly available data from Guilford County schools is synthesized to provide an analysis of gang-related risk factors present within the system and crime and violence incidents across school settings. Additional school data were obtained from surveys administered to School Resource Officers regarding perceptions of gang activity within schools and their perceived ability to effectively deal with it. Surveys were also administered to community youth and adults to ascertain their perceptions of gang activity in their neighborhoods, schools, and day-to-day lives. Interviews with gang-involved youth provide additional first-person understanding of gang life in the county.

Based on all data collected, the assessment will be used to guide the next step of the OJJDP Comprehensive Gang Model, which is the development of a strategic plan for prevention, intervention, and suppression activities related to youth gang violence in Guilford County. According to the Model, this next stage will be driven by a diverse, multi-disciplinary steering committee that will coordinate strategies and policy decisions to reduce youth gang activity in Guilford County.